I’m sitting out on the balcony with the view of the surrounding mountains. The air is fresh and the skies are endless. Yesterday, the land stretched out to me for the first time when I was on a bus heading to Boulder, Colorado.

Outside the bus, the undulating hills gave way to a row of mountains under a misty blue sky. It made me think about the Adirondacks or Peru, my home country with its soft but sometimes jagged peaks. The houses often had a subdued western style, but in other areas, modern buildings blended with the fall colors. The roads were flat and endless, and the trees small. Black cows grazed the dry beige grass. It was almost like someone had painted them on the neutral landscape. They seemed small from where I was, and I didn’t see a barn nearby, so perhaps the cows were wandering freely.

From the balcony of the apartment, I noticed a squirrel on a tree, standing there with its fluffy tail, eating a morsel of food. The cool breeze moved through wide spaces then whirled around my hair. It was strange to be in a progressive city, blooming with marijuana establishments, environmentally conscious city planning and sport activities, despite the consensus of less than half the country, saying this wasn’t working. I kept telling myself this kind of place does exist, so why can’t it exist elsewhere, but it’s possible we were ignoring the rest of this country’s inability to move forward.

In all its isolation, Boulder seemingly untouched by the results of the election, while the rest of the country seemed to be in ruins (according to twitter)—at least in the NYC and California, where people were protesting as they should. I saw a protest on Pearl St. a few days later, but not like the ones being shown on T.V. No one was rioting or burning things here, but a lot of young and older folks showed up with signs and drums. 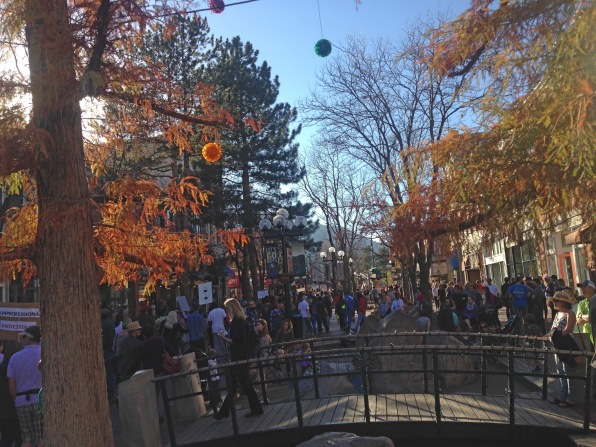 The next day at the start of the Mt. Sanitas Trail, the altitude suddenly hit me, and I slowed down, realizing it was going to take some time getting to the top. I kept stopping every now and then doubting myself. But I had enough water and chapstick; my lips kept turning dry and parched. The air was thin and cool, but the sun was still out, falling on my face, and making it too hot to keep a sweater on. I told myself I had to work through it, through the rocks, the broken ground, the steep climbs and twisting paths that sometimes weren’t clear. I said hello to some folks walking down. I asked them how far away the top was. Many of them downplayed their estimations, but there were smiling me on, so I kept going. I had briefly talked to a guy at the beginning of the trail, but I stayed behind, feeling quite content to take my time. I never did understand why people wanted to race to the top and then race back down. I guess for some this was common place, to hike up this trail as a workout. But I wanted to enjoy the sights, and take in  every twisting corner and dusty path, because who knows when I would return.

In a way, the trail helped the anger and disappointment of the election fade away, slowly taking away its stubborn hold on my thoughts, and the “What ifs?” or “What is wrong with people?” Why had this election felt like the biggest devastation? It was clearly out of my control. The only important matter was  the steps in front of me and the surrounding pine trees. From the top I saw Boulder and its tiny homes; the red, orange trees, the layers of sky. I rested for a while, contemplating the landscape, knowing that this feeling was eternal, being close to mountain and sky.